Labour migration in itself, the existence of more opportunities and gaining of international experience are all assets, but the challenge is how we attract these highly skilled workers back home, so that their home countries and minority communities would benefit from their much needed knowledge and experience. During 11-12 December 2019 experts, regional and minority leaders, decisionmakers discussed the ways in which minority regions can counter the effects of workforce migration and brain drain in Potsdam, at FUEN’s Forum of the European Minority Regions.

The Forum, held at the Brandenburg State Parliament, was welcomed by Barbara Richstein, Vice President of the Parliament. „It does a great honour for us to host the Forum of the Regions and the FUEN, an international minority organization with excellent reputation. The theme of the conference, the exodus of intelligent young people is familiar to us, as we also had to deal with this situation after the fall of the Berlin wall” – she said. Mrs. Richstein added that they consider a real asset that the Sorbs and Vends in Lusatia has maintaned their nationality and culture, and Brandenburg supports this process also by legal acts.

FUEN President and Member of the European Parliament Loránt Vincze expressed his gratitude to the Brandenburg State Parliament and the regional government. He noted that the exodus of young, highly skilled work force and labour migration in general have an additional very severe impact on minority communities, as the political weight of a minority community is directly linked to its number, so losing the young, skilled members of the community has severe future consequences on its political representation capital. It also makes the communities more vulnerable, weaker, with less internal resources for recovery and development. He also presented some statistical data: In 2018, there were almost 17 million EU28 movers. Germany (33%) and the UK (20%) absorbed more than half of EU28 movers, while the top countries of origin were Romania, Poland, Italy and Portugal.

David Statnik, Chairman of Domowina, the Union of Lusatian Sorbs talked about the importance of rural development: “Logic says it makes more sense to make a motorway near Berlin than a rural road near Cottbus, because more people are going to use it. But in fact it makes sense to build rural roads, as they are the way back home.” Secretary of State Tobias Dünow, Lusatia Commissioner of the Prime Minister of Brandenburg Klaus Freytag and members of the State Parliament Kathrin Dannenberg and Péter Vida also welcomed the participants.

The brain drain of young people moving to Germany and Austria is the biggest single threat to the German-speaking community of South Tyrol. As we learned in the first panel discussion, many minority communities face similar problems. In South Tyrol and the whole of Italy the most successful way to reverse this process is a resettlement programme which gives long-term tax pay cuts, but mobility, fast internet and a good childcare system are also good motivations. In Saxony small, participatory community projects are the most effective, and higher education also pays its dividends not only for young people but also for companies which move to the region to find qualified work force. The University of Trinity Saint David in Wales organizes vocational courses for pupils aged 16-18, as they recognized that brain drain appears even before young people turn 18. In Romania the development of the Hungarian language higher education system stopped the exodus of young people to Hungarian universities, showing that with proper measures and by creating better opportunities the migration could be better controlled.

The transformation of the current economy to one that is both ecologically and economically sustainable is one of our major challenges and can result in an economic downturn and increased unemployment, but also provides us with opportunities that contribute to economic growth. In the Forum of European Minority Region’s second panel we learned about such innovative approaches from Ireland, where Údarásna Gaeltachta, an organization focusing on the economical development of the small, isolated communities where the  Irish language is still spoken, put the bases of a maritime innovation park with ivestments from universities and companies. The Director General of Foreign Action of the Government of Navarra talked about the importance of cross-border collaboration, saying that if only 20% of the existing obstacles were removed, border regions would increase their GDP by 2%. Lusatia has many programmes to help resettlement, but the low visibility of them is a real problem. For them, the challenge is to gain more visibility for what they have to offer. On the other hand, being part of a minority can be a blessing and a curse in the same time, as is the case of the Germans in Hungary: many German companies invest in Hungary and they are looking for German-speakers, but even so many of the Hungarian Germans move to Germany, Austria or South Tyrol.

Cross-border commuters contribute to the prosperity of border regions and enhances cross-border trade. Commuting also keeps the European Union together and favours integration and unity, but states take different approaches towards this phenomenon. The panelists of the first panel of the second day  presented the situation in their homeland. In the German-Danish border region commuting is more common than migration,  with 15,000 people crossing the border daily to work in the other country. The Swedish speaking people of Finland count for 35% of Finnish citizens moving to Sweden, and commuting is also very common among them despite the geographical obstacles. It was pointed out that commuting has to be encouraged, as it is much better than losing the citizens to migration.

Regarding the Slovenian minority of Austria we learnt that commuting happens in both directions, but this is a relatively new phenomenon. Also, Austria does not have a helping attitude towards commuters. From Italy comes a good example of cross-border collaboration with two cities from different sides of the border applying together for the title of European Capital of Culture in 2025. The Hungarian minority of Slovakia lives next to the border with Hungary, but commuting is not easy, as in the more developed Western part the Danube forms a natural barrier, while in the East the Hungarian part is also underdeveloped and lacks job opportunities.

How can we lure back young people to their home regions? The last panel of the Forum of the Minority Regions focused on personal experiences of members of the  Sorb and Rheto-romansch minorities, on how the economics can overtake politics and make language skills valuable, as is the case in Opole, home of the German minority in Poland, on how cultural heritage can become a drawing force – the case of Calabria in Italy – and on the importance of finding niches and using them to develop the society.

In his concluding remarks FUEN Vice President Bahne Bahnsen pointed out that brain drain is a global problem which even New York has to face. The presentations showed us that this is a formidable challenge, but also successful ways of promoting remigration through politics, policies, cross-border collaboration an civil activism, he said. He pointed out that migration from rural to urban areas is something the European Union has to deal with, helping the regions with European structural programmes in this regard. 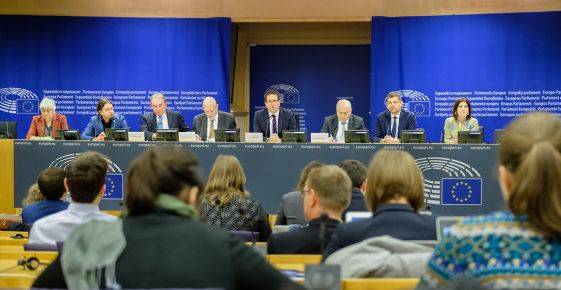